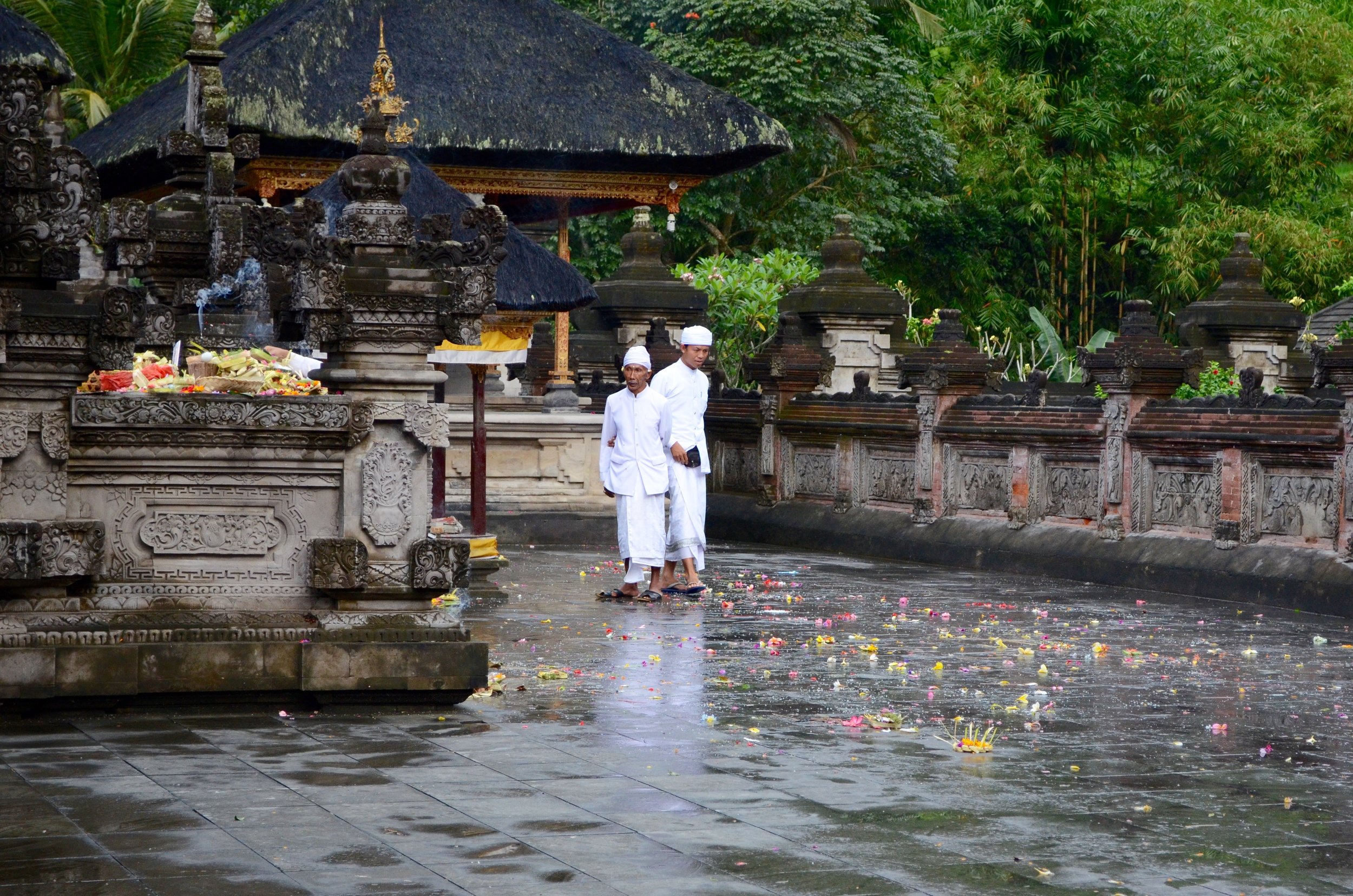 Priests among the colourful offerings after a ceremony at Tirta Empul, a water temple near Ubud, Bali.

After our journey throughout the island of Java, Indonesia, we then hopped on the ferry and travelled over to the island of Bali – probably the most well known of the Indonesian islands. As we drove throughout the island, you could feel Bali’s unique character come through. Almost every home has a small shrine set up for their daily offerings, the baskets and flowers from that morning’s ritual scattered across the sidewalks.

We spent our first day in Ubud going out and exploring all the treasures that lay in the region surrounding the city; Bali has so many incredible temples and sites to discover! The easiest way to explore is to get a driver for a day, three of us went together and arranged it through our hotel, which meant we had a knowledgable guide and a comfortable way to travel around while seeing an astounding number of sites. Despite all that we saw, it never felt rushed, and we were free to take as much time as we wanted at each stop. Plus, we got to determine what we did or didn’t go and visit. 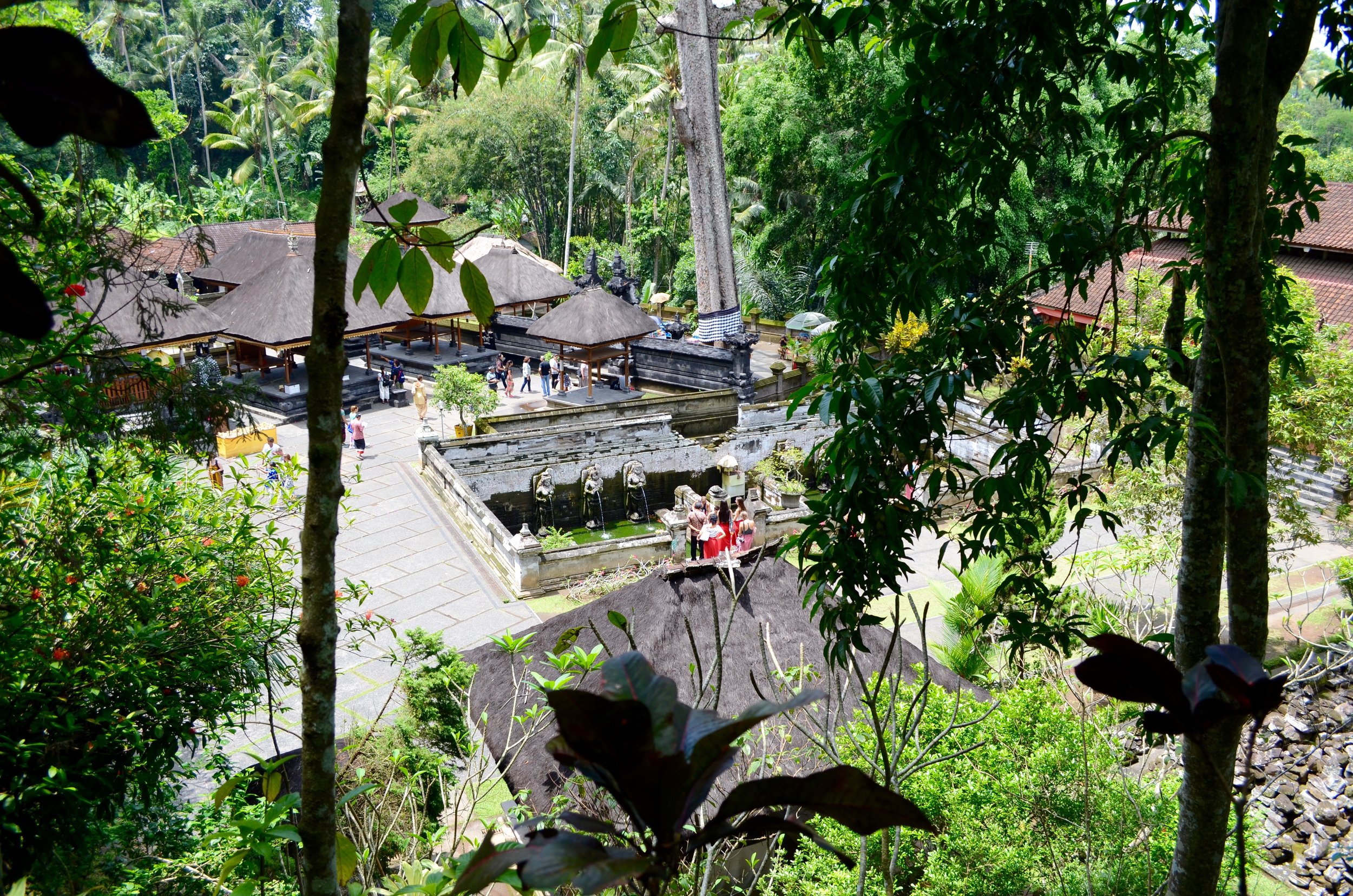 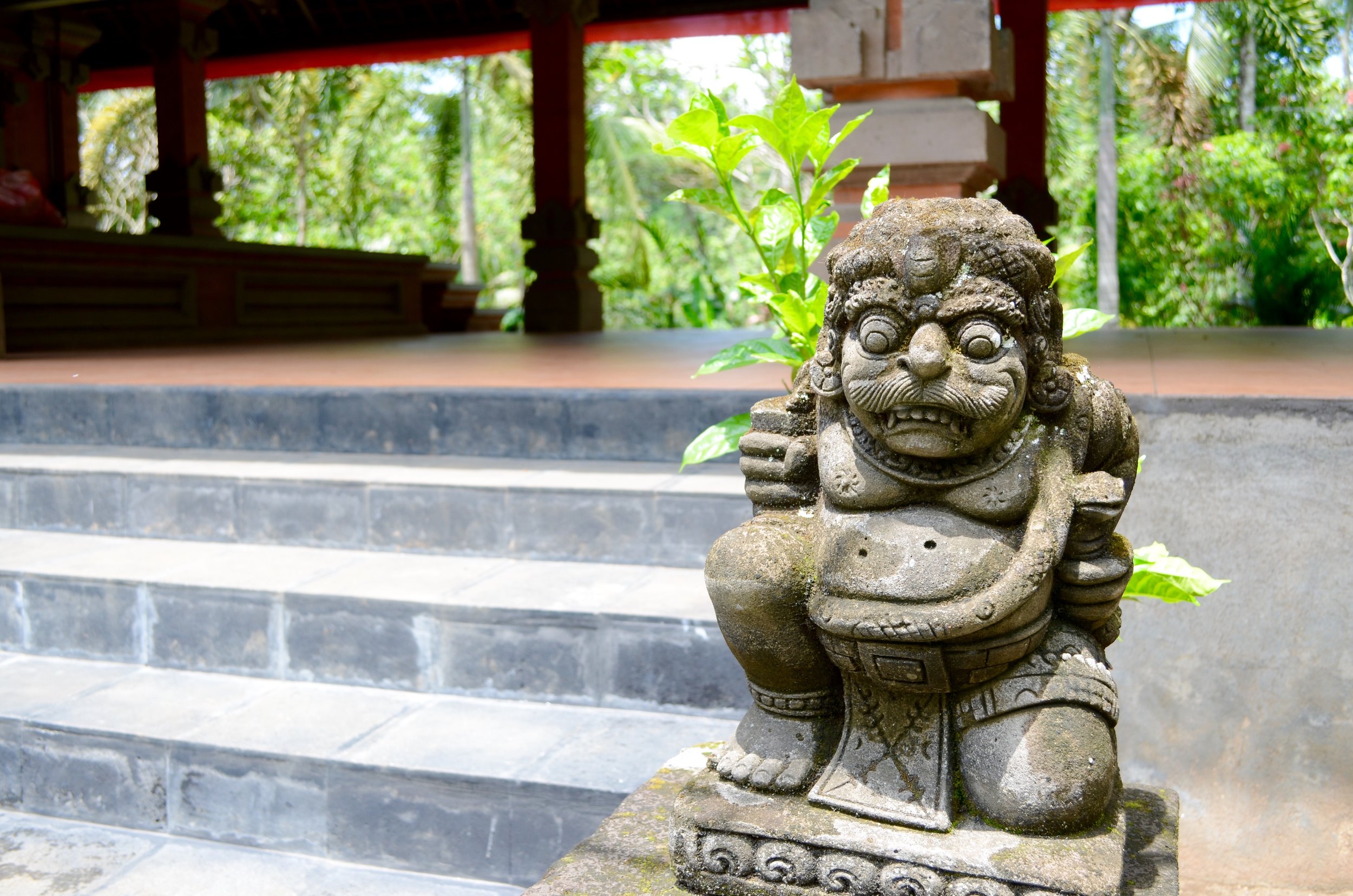 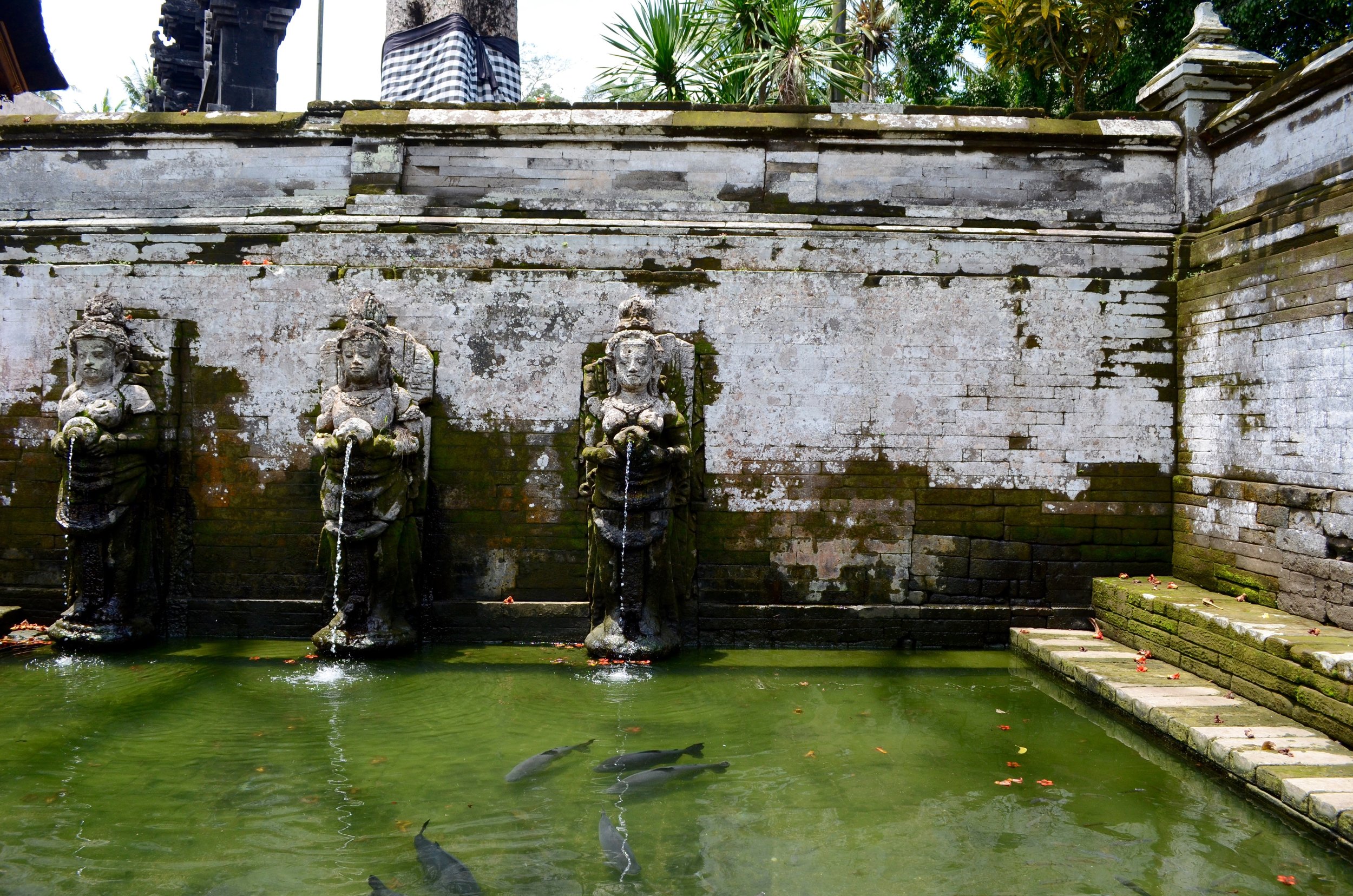 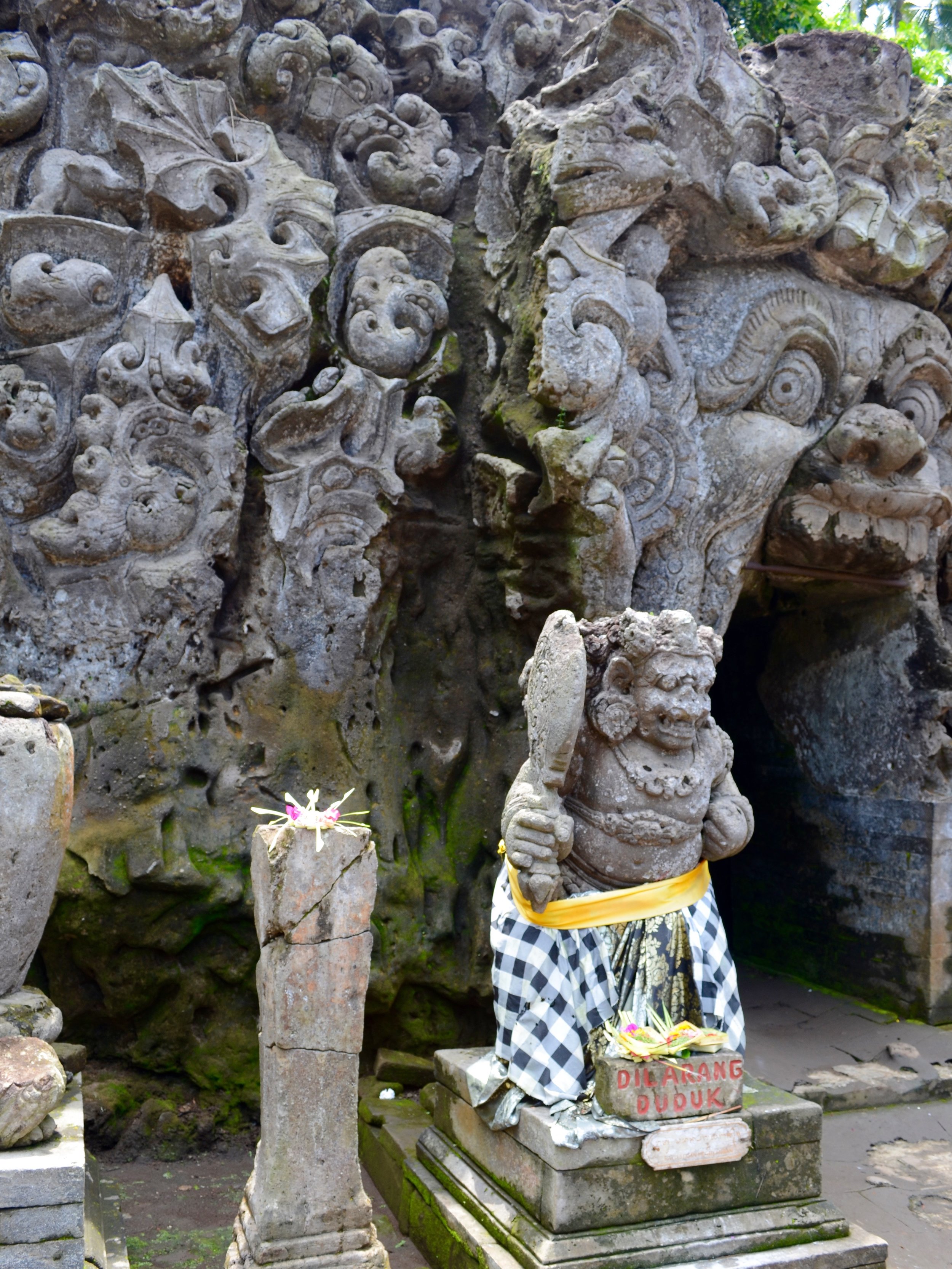 You won’t actually find any live elephants when you visit Goa Gajah, or the Elephant Cave. The site, which was built on a hillside nestle between two rivers, is a Hindu meditation complex. The name likely comes from the meditation cave, carved into the stone where you will find inside a statue of Ganesh, whose head is that of an elephant’s.

It’s a lush site, surrounded by the forest, ponds, and streams, with bathing pools served by Hindu angels whose water pots pour cleansing water into the pool. Even though we were there first thing in the morning, there were already quite some tourists around – possibly it felt busier due to the site being on the small side, so good luck getting a clear shot of the Elephant Cave without someone else around! 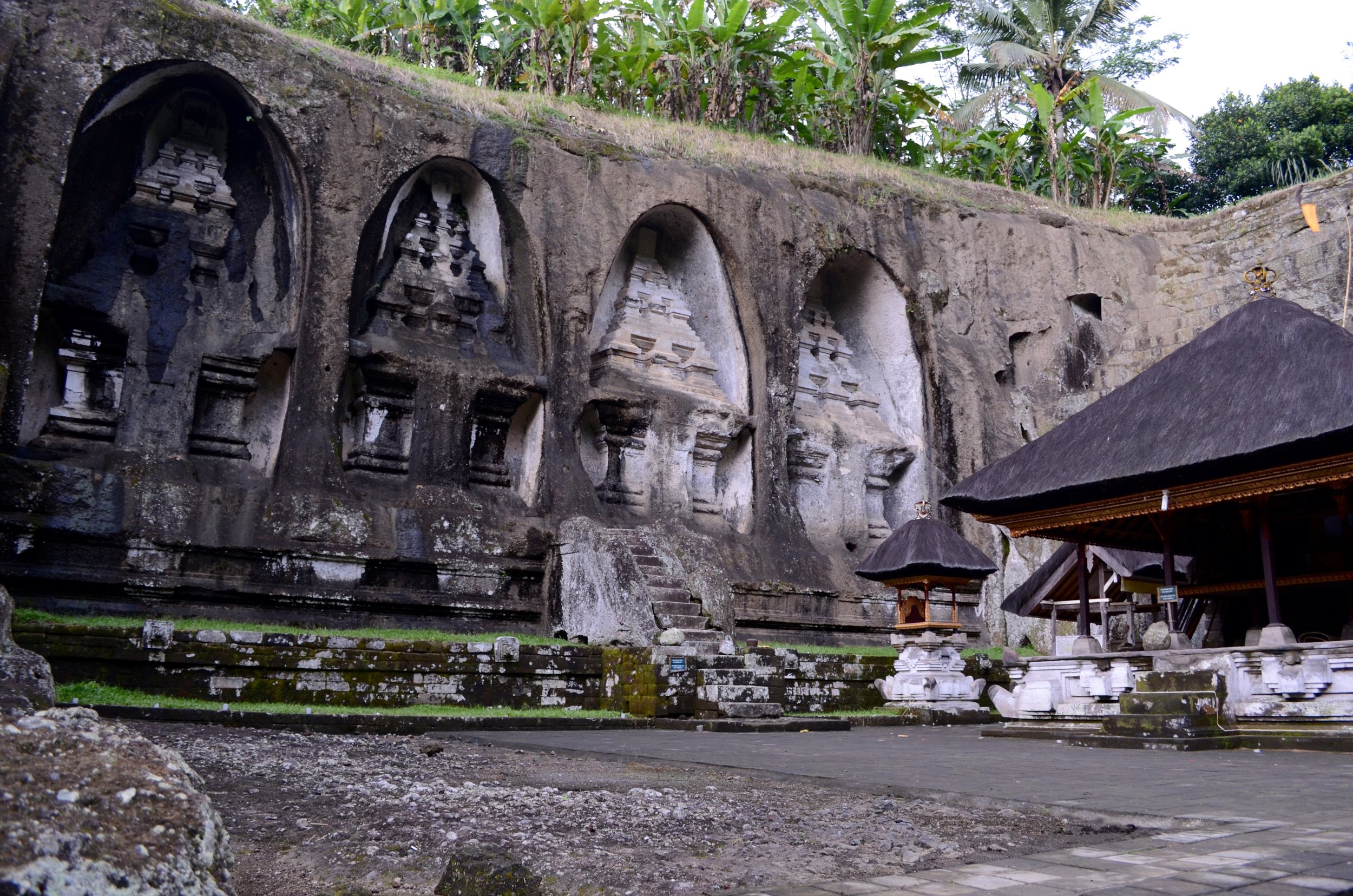 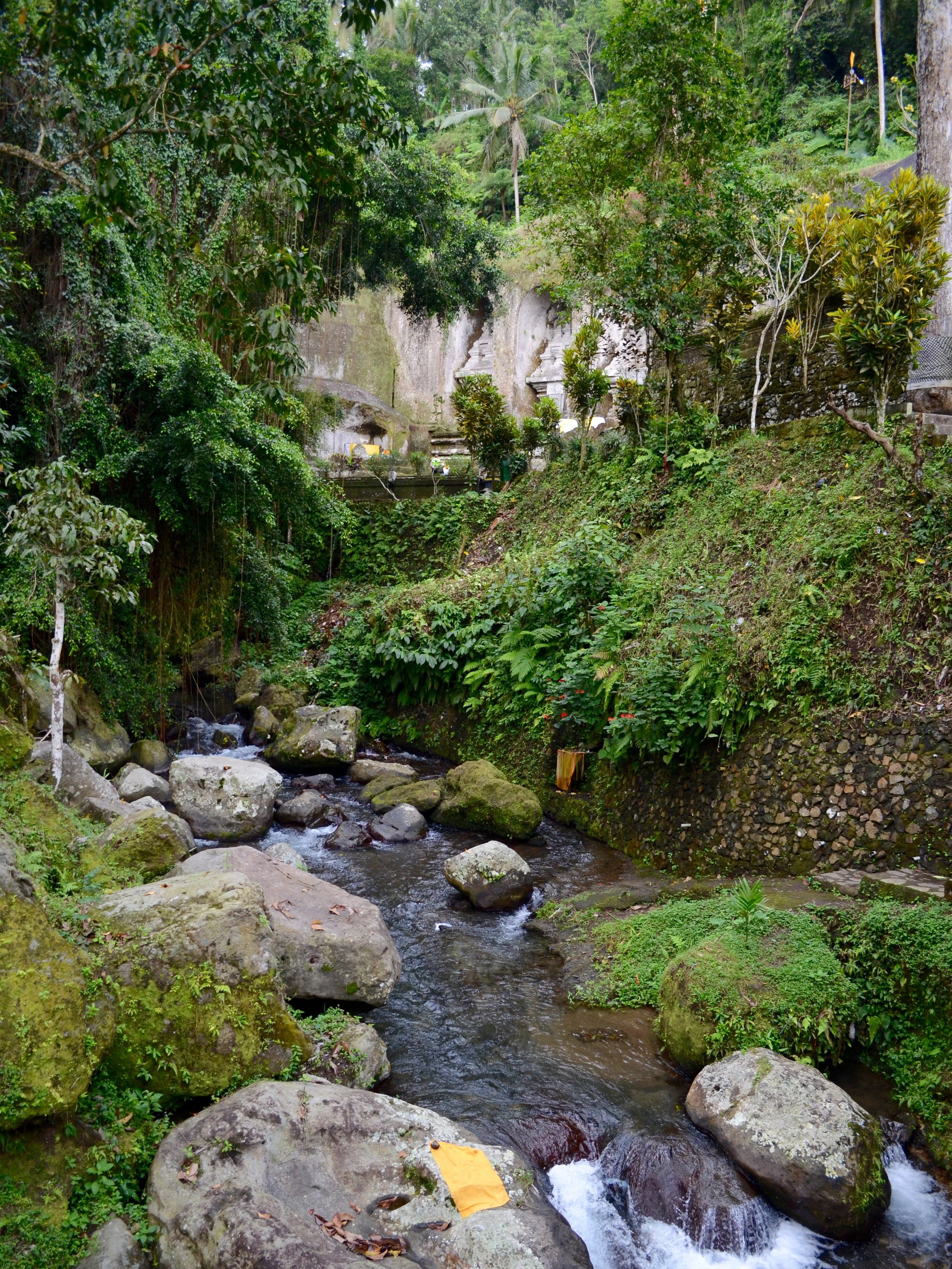 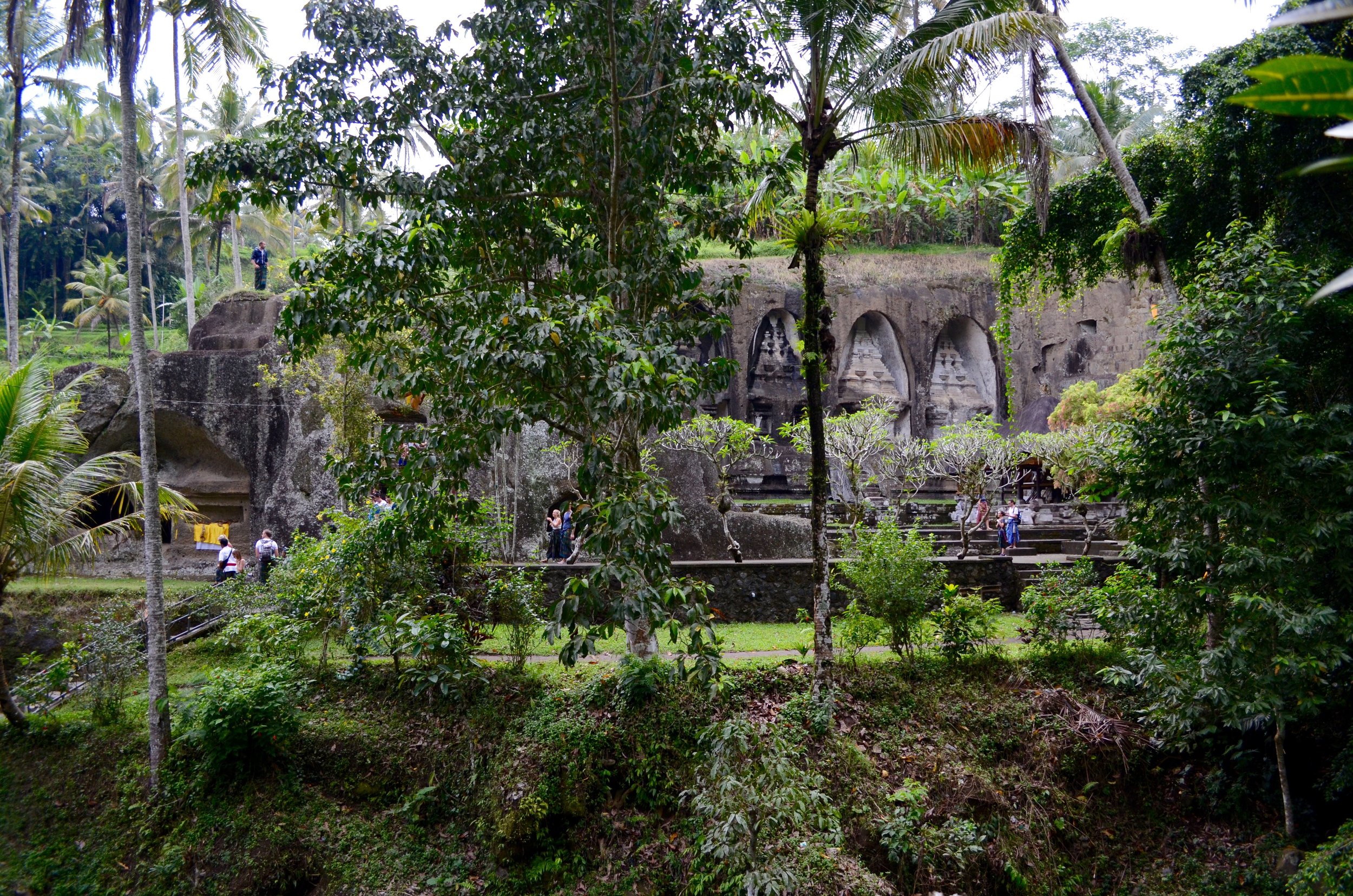 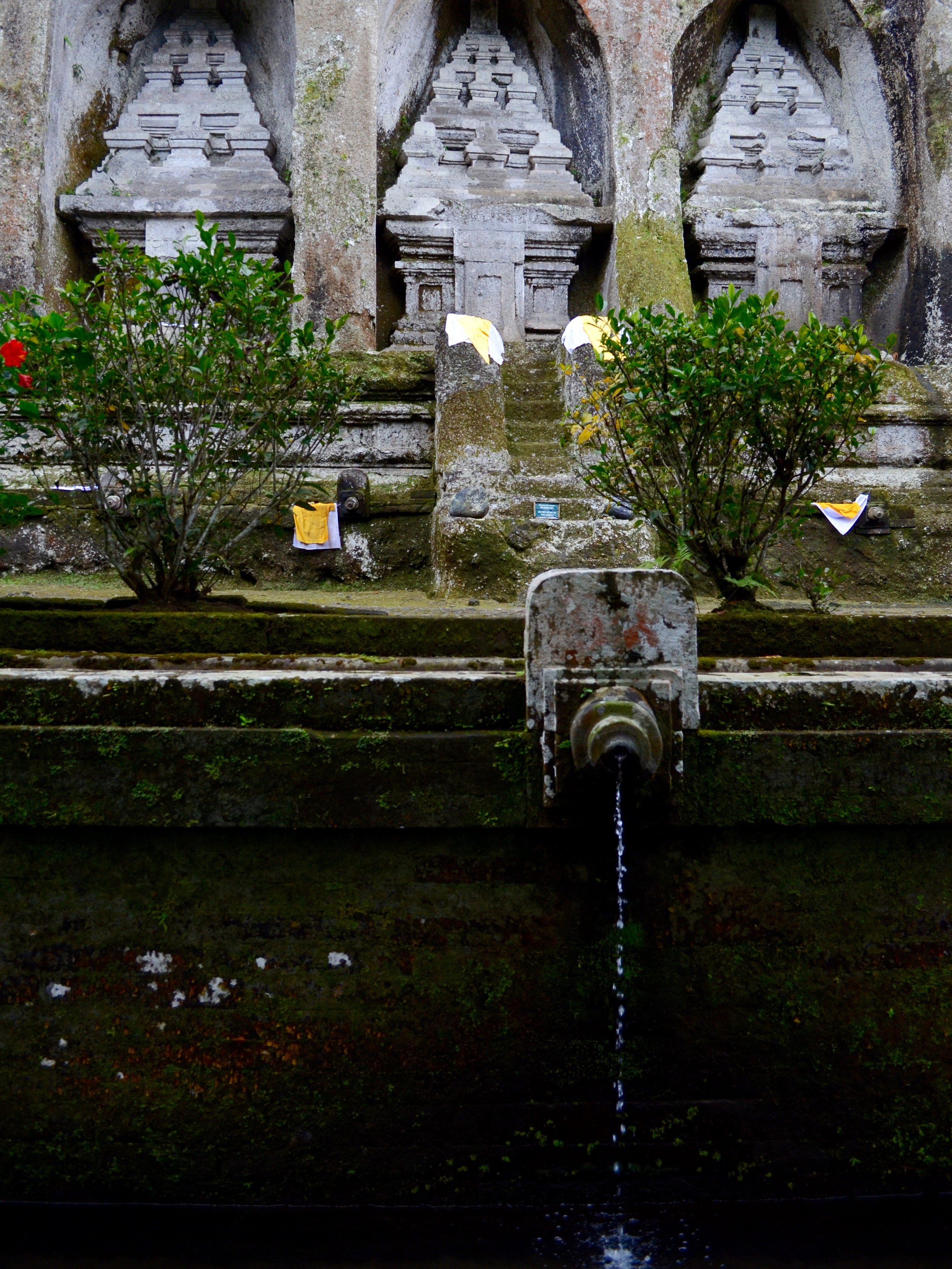 Gunung Kawi is an impressive sight with the shrines carved into the rock cliffs. It’s quite a walk down from the temple entrance past loads of kiosks selling Balinese souvenirs, but at least it means you have an excuse to stop for a pause on the way back up! It also gives you some pretty views over nearby rice terraces and was very quiet compared to Goa Gajah.

The temple is considered one of the oldest and largest monuments in Bali, and legend says that each of the shrines represent a member of Balinese royalty at the time. 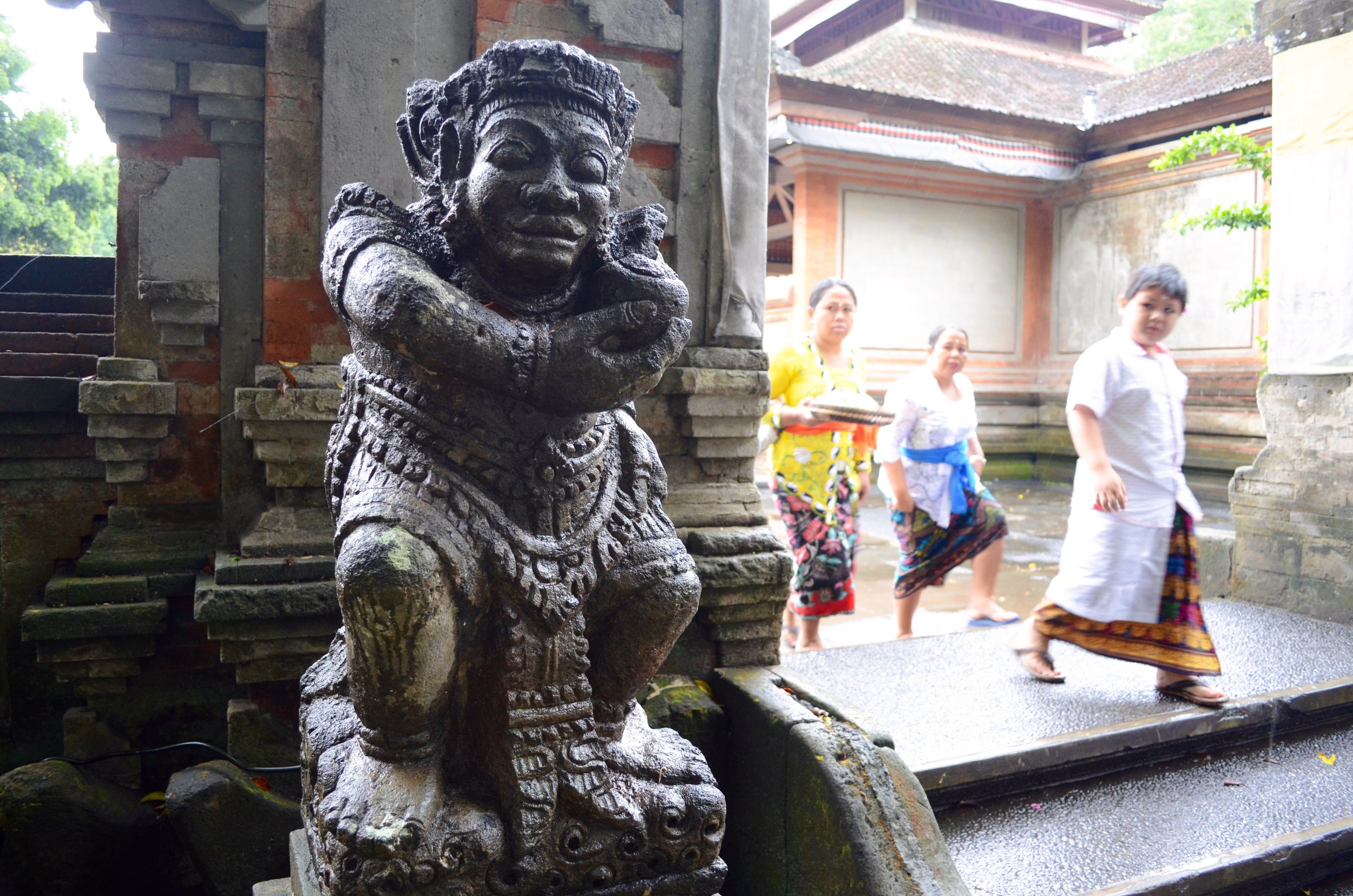 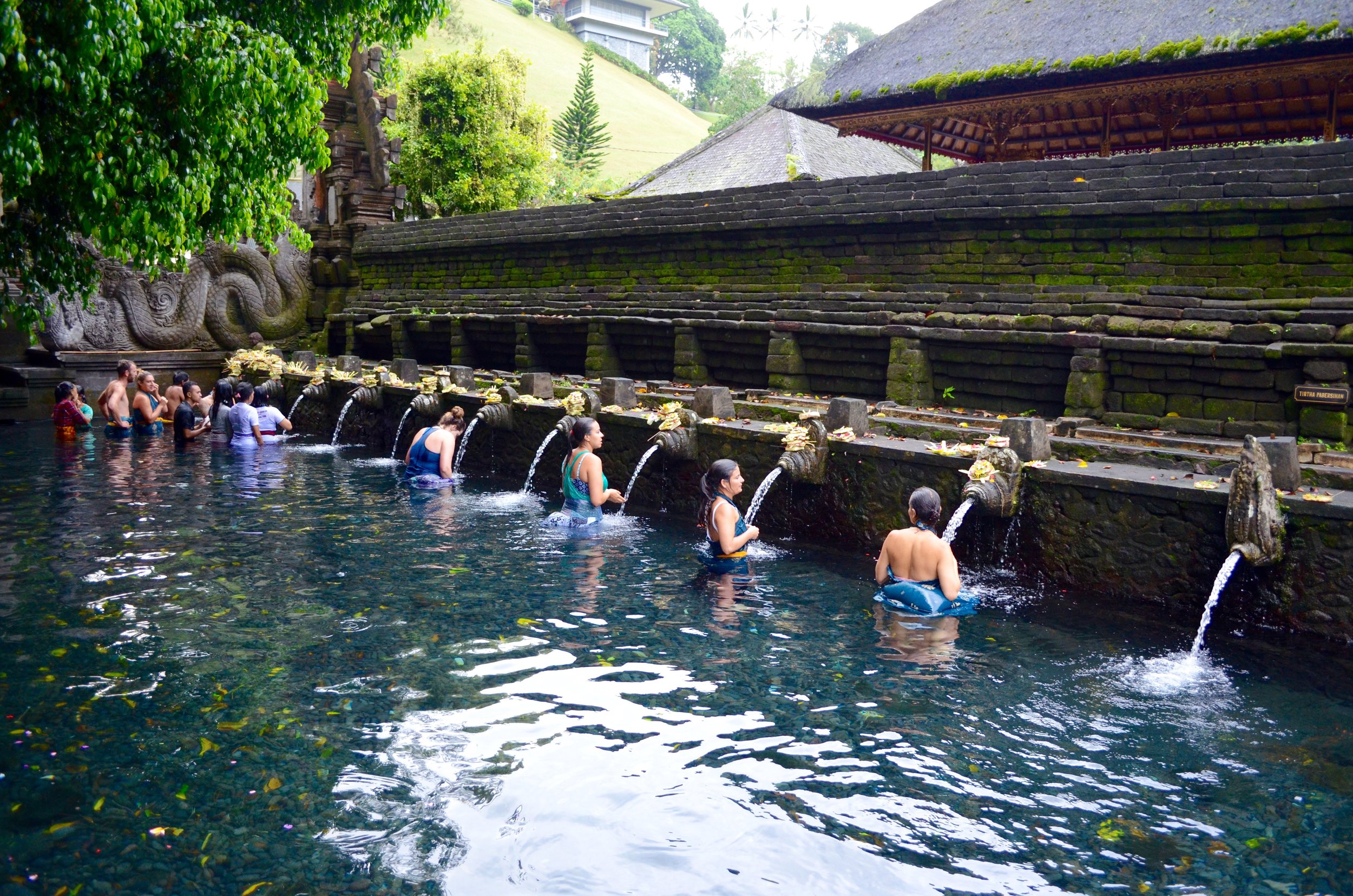 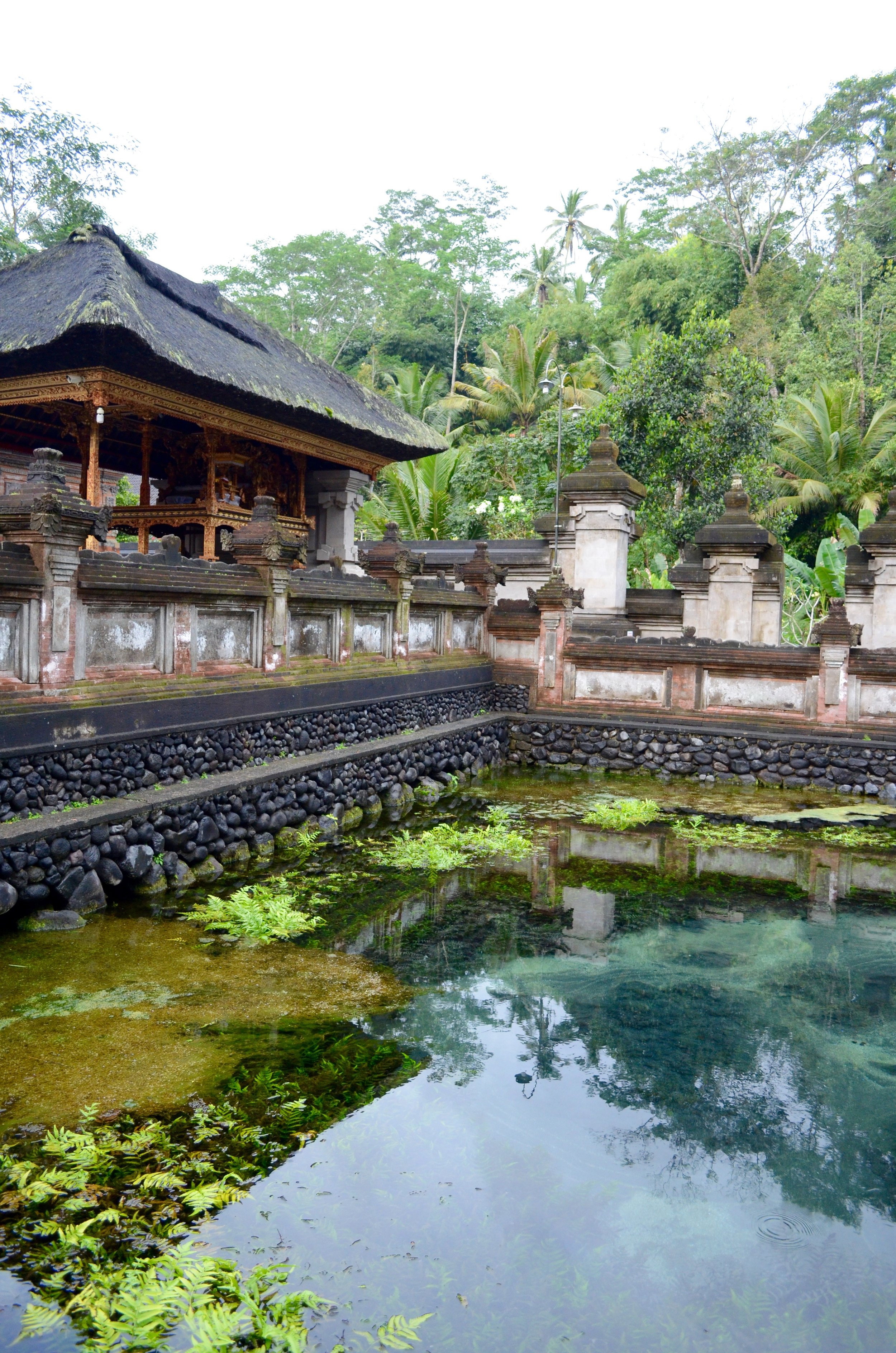 Tirta Empul, or Holy Spring, is a Balinese water temple known for its sacred waters where one goes for purification rituals. It’s dedicated to the Hindu god of water, Vishnu.

The pools contain 30 spouts of water, each section dedicated to a different form of purification, first for cleansing evil and bad spirits, then for prosperity, and finally to cleanse the body and soul. You begin at the lefthand side (when facing the pools) and cleanse yourself below each spout in turn.

I’ve seen some reports of long queues to partake in the cleansing ritual, but when we were there late in the afternoon (after a heavy rainfall), while plenty of people were milling about, the was no queue. Many tourists only posed for photos under the first few spouts and hardly any continued down the line to complete the full ritual. 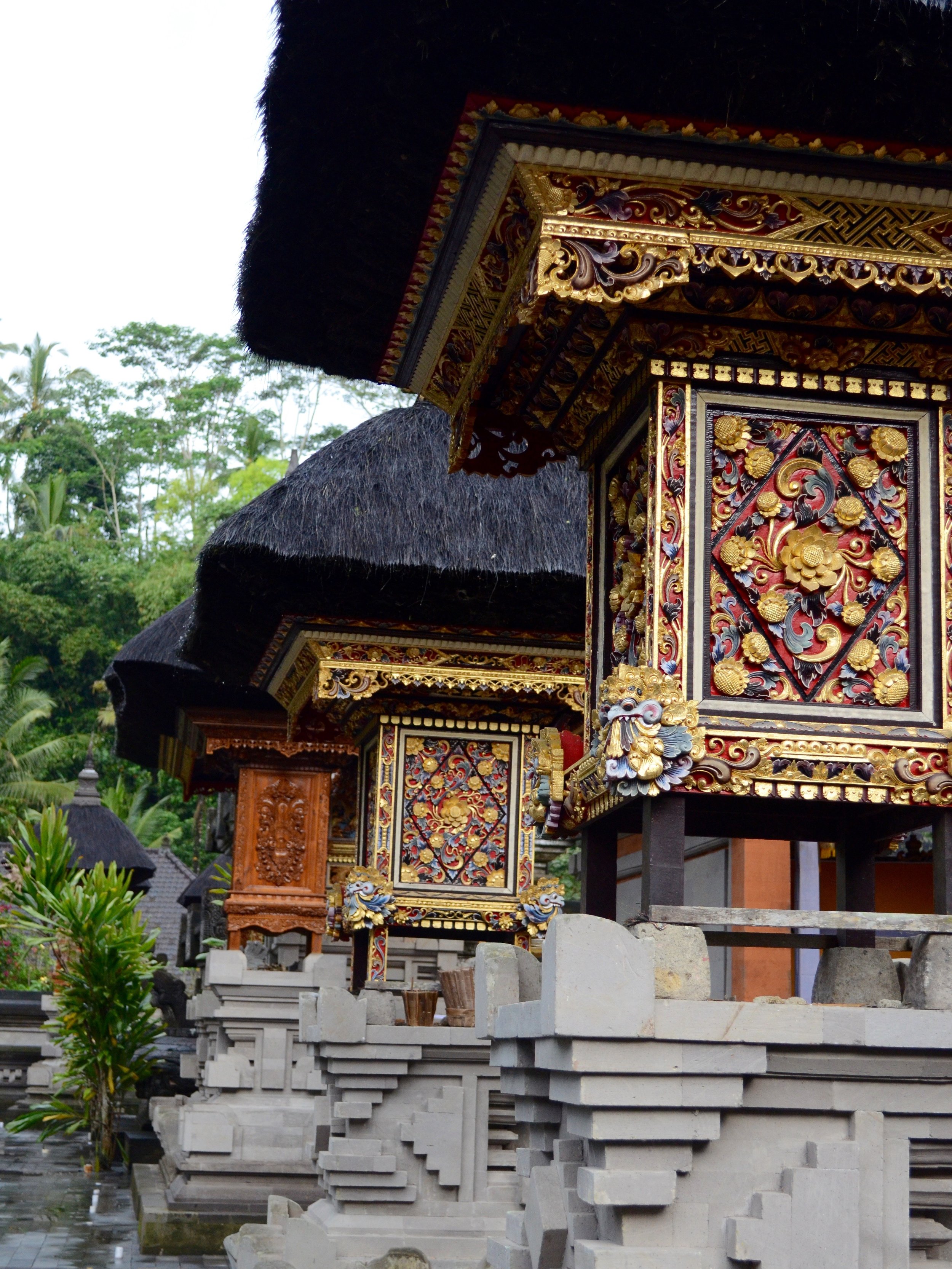 I’m a Nutritional Therapy Consultant passionate about helping you get healthy eating and living habits on autopilot so that you can use your precious energy for other things. Our lives are busy and stressful enough – we don’t need our health and nutrition coming on top of that.

Are you getting enough fiber in your diet? 🌱 T

Is February the new January?⁠⠀ ⁠⠀ I don't

We are just two weeks into the New Year - anyone e

Stay up to date!